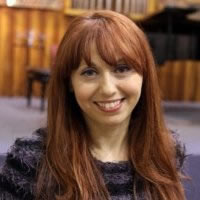 Nicoletta Maggino began training as an opera singer at 15 and her interest in teaching in singing boasts thirty years of experience . She completed her musical studies at the Scuola di Musica di Fiesole and has attended master classes of renowned opera singers (Gino Bechi, Giuseppe Taddei, Ileana Cotrubas, Walter Blazer, Julia Hamari, Elly Ameling). Nicoletta has performed in numerous concerts around the world, opera performances (Teatro Comunale di Firenze, Teatro La Scala di Milano) and musical competitions. She teaches young opera singers and introduces them to classical repertoire. In addition, Maggino prepares soloists and choruses for auditions in theater and recording performances, concerts, contests, television programs, and opera performances, such as Maggio Musicale Fiorentino, Festival dei Due Mondi di Spoleto, and Festival Mozart di Rovereto. Maggino has worked with artists such as Z. Mehta, G. Sinopoli, R. Abbado, S. Osawa, L. Dodin, D. Dorn, C. Saura. She taught opera, gave vocale advice and directed choruses at Scuola di Musica di Fiesole (from 1986 to 2000). In 2000 she began teaching opera and singing-technique at “Scuola di Musica Il Trillo” in Florence. She is a specialist in teaching Bel Canto and has a substantial amout of experience teaching Italian diction to singers from around the world. She holds stable workshops and masterclasses at the Festival Italia Corea. She teaches students from many italian and foreign universities.