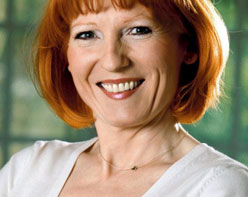 Eva Hess Thaysen has sung more than 40 roles on stage, mainly as a principal soloist with The Danish National Opera (Den Jyske Opera). She has performed with all Danish Symphony Orchestras and has also appeared with The Polish National Radio Symphony Orchestra, Royal Liverpool Philharmonic and Malmo Symphony Orchestra. She has performed at festivals all over Europe and has recorded extensively, including songs by Carl Nielsen (Rondo), Charlotte in “The Sleeping Draught” with the Danish Radio Sinfonietta (Dacapo), songs by American composer Dan Marmorstein (Classico), and numerous recordings of contemporary Danish music. She is President of The Danish Lied Society, teaches voice and is Head of Vocal Studies at The Royal Danish Academy of Music in Copenhagen.