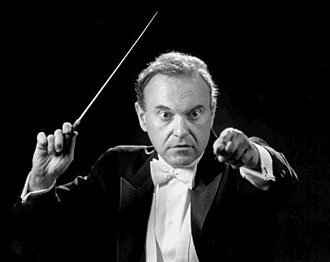 In this fall, 2001 season, Joseph Rescigno begins his 20th anniversary season as Artistic Advisor and Principal Conductor of the Florentine Opera Company of Milwaukee, WI. In recent years, he has also served as Artistic Director of Montreal’s Metropolitan Orchestra.

In this special season, Rescigno looks forward to conducting Der Rosenkavalier and Tosca for the Florentine.

He will also return to the New York City Opera for the third year in a row to conduct a new production of I Capuletti ed I Montecchi, Bellini’s rarely heard take on the Romeo and Juliet story.

Rescigno has recorded with Analekta of Montreal, leading the Metropolitan Orchestra in most cases: Beethoven’s Eroica and Egmont with soprano Karina Gauvin, Mendelssohn’s violin concertos with Angèle Dubeau, Brahms’s piano concertos with Anton Kuerti, and Mozart arias with soprano Lyne Fortin. Also for Analekta, with soprano Diana Soviero and l’Orchestre de l’Opéra de Montréal, he conducts Verismo, a collection of arias from well-known and little-known operas of the verismo school. Further, Rescigno conducted the world premiere of Minoru Miki’s Joruri and recorded the opera with the Tokyo Symphony for Toei Video Disk.

Joseph Rescigno is a native New Yorker and a graduate of Fordham University (Phi Beta Kappa) and the Manhattan School of Music (Master of Music, piano, under Ada Kopetz-Korf. He comes from a long line of musicians on both sides of his family. His uncle, Nicola Rescigno, conducted operas around the world and co-founded both the Chicago Lyric Opera and the Dallas Opera. His mother was a singer and pianist. His grandfather, his first music teacher, played trumpet with the New York Philharmonic and the Metropolitan Opera

Joseph Rescigno makes his home in Manhattan with his wife of 30 years and three felines. When he can, Rescigno fishes and paints. Audio samples, photographs, and additional information about Rescigno can be found at www.concertatore.com.