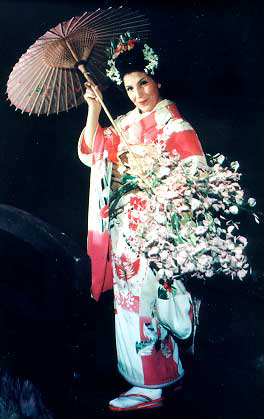 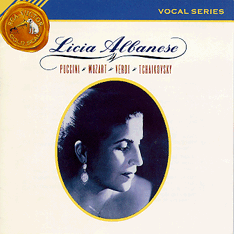 For more than a quarter of a century Licia Albanese epitomizedItalian opera on the world’s greatest stages. Her first appearance was as a replacement for an indisposed soprano at the Teatro Liricoin Milan as Cio-Cio-San in Puccini’s Madama Butterfly. It was with this role that she made her American debut at the Metropolitan Opera in 1940 and it has become synonymous with her name to this day. Her list of roles is impressive: Mozart’s Countess,Massenet’s Manon, Bizet’s Micaëla, and Verdi’s Violetta. However, it is as an interpreter of Puccini’s heroines, particularly Cio-Cio-San, Mimì and Liù, that she is most highly regarded. During 26 seasons at the Met she sang 427 performances of 17 roles; she also sang with the San Francisco Opera for 20 seasons, in addition to international appearances. Since her retirement from the Met in 1966, she has given generously of her time and knowledge to help young singers. Mme. Albanese is chairman of The Licia Albanese-Puccini Foundation and is an avid supporter of the Bel Canto Institute for which she was honored in 1998.